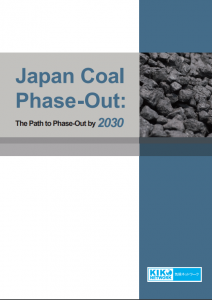 To achieve net zero emissions of greenhouse gases (GHGs) as called for under the Paris Agreement, it is crucial to quickly decarbonize our energy sources. Coal power in particular needs to be phased out, which obviously means halting new coal plant construction and also strategically retiring existing plants. Developed countries are expected to phase out coal by 2030.

In response, a growing number of countries and sub-national governments already declared their commitment to phase out coal, so coal phase-out is becoming an international trend.

It is obvious that Japan, as a developed country that has ratified the Paris Agreement, should cancel all current plans for new construction, and also retire all existing coal power plants by 2030.

In this context, Kiko Network has released a report entitled “Japan Coal Phase-Out: The Path to Phase-Out Coal by 2030” and proposed the Japan 2030 Coal Phase-Out Plan. The plan presents a schedule to gradually retire all 117 units at existing coal power plants in Japan by 2030, starting with the oldest operating and least efficient plants. The plan does not include new units that had not yet started operating as of April 2018, based on the premise that they should be cancelled before they start operating.

The report explains that this plan is entirely achievable without threatening Japan’s electrical power supply and without relying on nuclear power, taking into account the available capacity of LNG and other power generation options, as well as the spread of renewable energy and improvements in energy efficiency.

Kimiko Hirata, International Director for Kiko Network, said, “The Japanese government should devise a detailed path for coal retirement as suggested in this report, formulate an official Japan 2030 Coal Phase-Out Plan, and give it a high priority as part of a long-term low greenhouse gas emission development strategy. With this plan as a basis, Japan also needs to increase its GHG emission reduction targets to be consistent with the Paris Agreement.”

Co-author Hiroshi Ito added, “The government and industry should disclose more data, since it is currently difficult to access and verify the actual situation at existing plants, such as the capacity factors and emissions of each generating unit.

Japan Coal Phase-Out: The Path to Phase-Out by 2030