On February 15, 2021, Kiko Network published the English translation of the 2020 Edition of its report “Japan Coal Phase-Out: The Path to Phase-Out by 2030.” 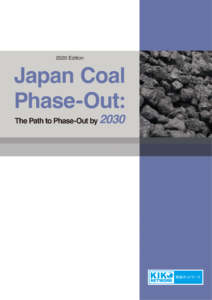 Japanese Prime Minister Yoshihide Suga has declared that Japan will aim to realize a carbon-neutral, decarbonized society and reduce greenhouse gas emissions to net-zero by 2050. It is crucial for Japan to quickly decarbonize its energy sources to achieve this, and also to be consistent with the goals of the Paris Agreement, of which Japan is a signatory. In particular, coal, which emits large amounts of greenhouse gases, must be phased out by all developed countries by 2030 in order to achieve the Paris Agreement goal of limiting the global temperature rise to 1.5°C.

A growing number of countries and sub-national governments have already committed to phase out coal by 2030. Additionally, companies, financial institutions and investors are also shifting their policies to exit coal. The coal phase-out is a global trend and continues to gain momentum at a rapid pace.

The Japanese government has adopted a policy to “fade out” only inefficient coal-fired power plants by 2030, and is currently considering regulatory measures, but that is not enough. In order to fulfill its commitments, Japan, which currently generates nearly one-third of its electricity from coal, must cancel plans and construction of new coal-fired power plants and strategically retire all existing plants by 2030. To accomplish this, it is necessary to establish a 2030 coal phase-out policy, formulate concrete implementation measures, and carry out the plan steadily and consistently.

In this context, Kiko Network has published a 2020 Edition of its report “Japan Coal Phase-Out: The Path to Phase-Out Coal by 2030” and updated its proposed Japan 2030 Coal Phase-Out Plan based on the latest data. The plan presents a schedule to gradually retire all 162 existing coal-fired power units in Japan by 2030, starting with the oldest operating and/or least efficient plants.

The report illustrates how this plan is entirely achievable without threatening Japan’s electrical power supply and without relying on nuclear power, taking into account the available capacity of other power generation options, as well as the spread of renewable energy and improvements in energy efficiency.