【Report】Out of sight, out of mind: Impacts of Japanese use of Australian Coal

Civil society groups in Australia and Japan have teamed up to release “Out of sight, out of mind: Impacts of Japanese use of Australian Coal”, a new report that examines the damage caused by coal mining in Australia and coal consumption in Japan, shining a light on the costs of Japan’s reliance on Australian coal. 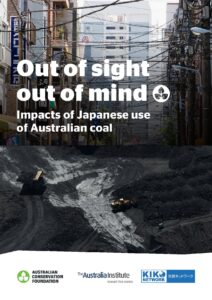 The report by the Australian Conservation Foundation, the Australia Institute and major Japanese climate organisation Kiko Network highlights the impacts on the climate, human health, ecosystems and wildlife habitats as a result of Japan’s use of Australian coal.

The groups, which are calling for Australia and Japan to phase out their coal trade by 2030, made the report to raise public awareness for the move from dependence on high-risk coal and nuclear energy to a sustainable future based on clean, safe renewable energy sources.