Kiko Network’View on Options for Energy and the Environment “All 3 scenarios proposed by the government sacrifice climate safe future” (Jul. 2012)

Options for Energy and the Environment

On June 29 2012, the Government presented ‘Options for Energy and the Environment’. In the wake of the Fukushima Nuclear Power Accident, it was presented to have the people discuss to review Japan’s energy and climate policies. Three options have been compiled by the Energy and Environment Council, based on proposals by the Advisory Committee under the Ministry of Economy, Trade and Industry (METI) and Advisory Committee under the Ministry of Environment (MoE).

Primarily speaking, based on experiencing the worst nuclear accident in history, talk of future design of energy system and vision for the future sustainable society, should be discussed and shown. However, without having basic principles, direction of future society, figures are calculated using an economic model first, and presented as energy mix options. On top of the figures being difficult to understand, there is no sufficient scenario towards a sustainable society. Hereafter, it appears a ‘National Discussions’ will take place in the summer. Then a government policy will be decided in August. What do these options mean to us? And, how should we respond?

The options that have been presented are these three: 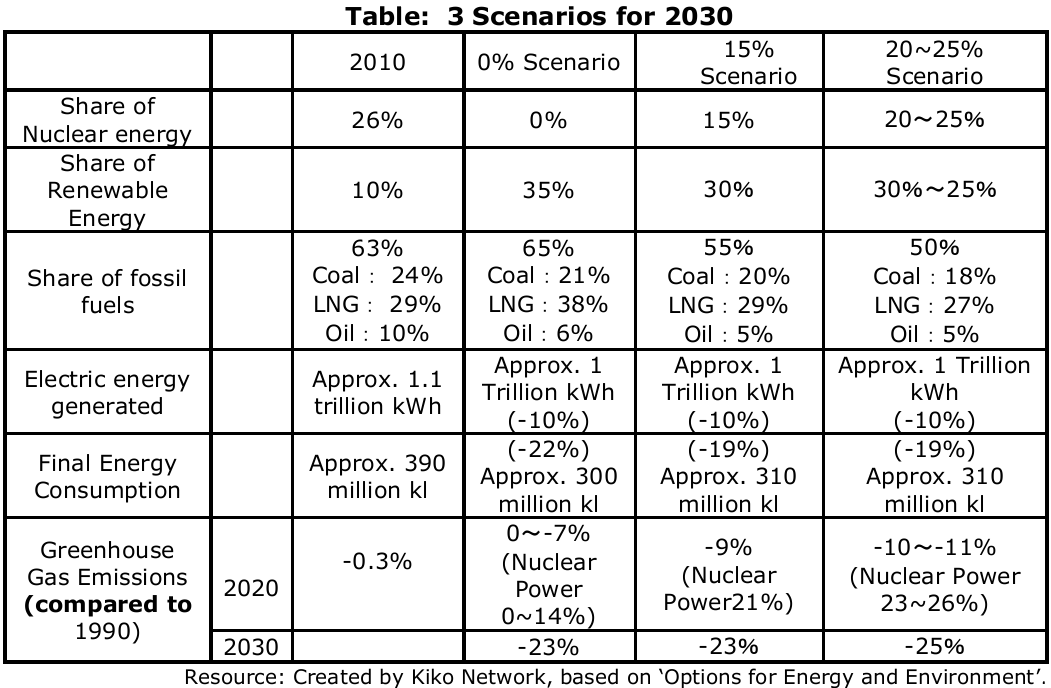 For dependence on nuclear power, government made it clear its basic direction to ‘reduce dependence on nuclear energy to the extent possible in the medium-to-long terms’. 0% scenario is clear on this. However, it is questionable whether 15% scenario and 20-25% scenario can be called “reducing nuclear dependence”. Because, if you trace the step-by-step reduction of decommissioning the existing nuclear power plants in 40 years lifetime, immediately decommissioning the dangerous nuclear power plants (Fukushima No. 5&6, Onagawa plant, and Hamaoka plant) and prohibiting new building, 15% by 2030 is unattainable. Let alone in the 20~25% scenario, it is impractical to have a condition that the operating years be more than 40 years with expansion and high capacity utilization; it is basically an unrealistic nuclear dependent system. Also, 15% and 20-25% scenarios are ambiguous as to whether nuclear power will be increased or decreased after 2030. Thus, there is only one choice for reducing nuclear power dependence.

The problem with choosing 0% scenario is that it is a choice that comes with the increase in fossil fuel dependence and sacrificing climate change problem. There is no alternative that allows the coexistence of nuclear power phase-out and reduction of ambitious greenhouse gas reductions. The energy conservation of all three scenarios will eventually be fixed at -10% reduction in 2030 of the total power generation from 2010 level and the final energy consumption will all be nearly a -20% so is very passive. Last year, Kiko Network announced that a 25% GHG reduction would be achievable, increasing energy efficiency possible, but no such option exists. It is likely people who wish to move away from nuclear are willing to more energy conservation, but there is no such options.

Since the assumption for energy conservation is low, the dependence on fossil fuel becomes high. Among them the proportion of coal, where it is 24% in 2010, are between 18% and 21% in 2030 and very high in either scenarios. It maintains the structure of fossil fuel dependence. With coal-fired thermal power, commercialization of such things as IGCC (Integrated Gasification Combined Cycle) and CCS (Carbon Capture and Storage) which government promote is not expected sometime soon, so without drastic reduction of coal dependency until 2030, an increase in CO2 emissions is inevitable. It is important to reduce the proportion of fossil fuel used and to shift natural gas which produces about half the CO2 emissions than fossil fuel.

With this premise, it is expected that the mass production society would continue and energy conservation is limited, for example, a 1.2 billion ton steel production, which was the level of a peak production in 2007, is to be maintained until 2030. Also, reduction measures to the power sector have not properly incorporated.

Originally, there should be a debate on how the social and industrial structures should shift toward green economy, but there is no such debate, and continuing current system is a common prerequisite for any of the scenarios discussed. So far, Japan’s climate change policy was unable to advance the reductions in industrial sector and was unable to enforce effective policies, such as, carbon tax and emissions trading scheme. As a result, it has lost the opportunity for a new green industry, and thus unable to create new jobs. The scenarios presented will yield to repeating the same mistake in the past into the future.

On the other hand, at the UNFCCC, issues on how to raise ambition (emission reduction targets) of each country are one of the important agendas. Contrary to the worldwide trend of raising the ambition, the scenarios presented do the opposite.

In order to realize nuclear-free and significantly increase renewable energy, it is important to dismantle regional monopoly power system of the 9 power company, to create electricity liberalization, and to establish separation of electrical power production from power distribution and transmission. This means, a fair system and rule must be created to send electricity generated by renewable energy projects, to facilitate the entry, and we would be able to choose the electric power company and the type of electricity. It would have been easier for us to think about the issue if the question had been ‘Should the power system stay as is? Or should we liberalize and have a system where we can choose the type of electricity?’. But the scenarios presented do not specifically say what would happen to the power system. However, post-Fukushima, this system reform is a big job that we must achieve. To strongly assert and demand this is an important point.

Raise your voice in national debate!
– Toward options to achieve nuclear free and climate prevention!

Amongst the scenarios, there is none that is truly sustainable and has the coexistence of nuclear free and climate prevention that is appealing to us. In addition, it says that adding measures would have significant burden on the economy and would require strict measures.

However, the government has neither said to us to choose one of the three.

We do not want a passive correspondence of choosing one of the options, but to be able to freely state our opinions on points that are missing and that are issues. And during the ‘national debate’, we must, along with assuring nuclear free, state that in regards to climate change point of view, all choices are insufficient and there needs to be a scenario 4 that reviews and strengthens the policy measures.