It was reported yesterday (October 1st) that Japan will aim to adjust their greenhouse gas emission reduction targets to 6-7% for 2020 compared to 2005 levels. On the same day at a press conference, Chief Cabinet Secretary Yoshihide Suga denied these media reports. However, as shown in the bar chart below, using the base year of 2005 compared with the base year of 1990, emission levels will be higher. Compared with the 6% reduction target for the first commitment period of the Kyoto Protocol, these are much more relaxed targets. If the government of Japan chooses to head in this direction, there is no way that this target will be accepted by the international community and the public.

Last week, Fifth Assessment Report of IPCC’s Working Group 1 was released and showed that it is certain that climate change is due to anthropogenic causes. Report shows that both current conditions and future projections for the melting of glaciers and sea ice, rising temperatures and rising sea levels are very severe. Based on this report, governments are required to make decisions to take actions toward bold reductions in greenhouse gas emissions.

In order to prevent a climate crisis, international agreement was made to drop global mean temperatures to below 2 degree increase from the pre-industrial levels. In addition, Japan is the 5th largest emitter of greenhouse gases and therefore has a great responsibility for setting ambitious target and taking actions.

Prime Minister Shinzo Abe instructed officials to review current mid-term target, announced in 2009, which was to set a 25% reduction from 1990 level by the year 2020. Japan will observe closely if and how the new reduction targets will be presented at next month’s COP 19 meeting in Warsaw. However, if the government is considering lowering the target as reported, Japan will not be able to contribute to global mitigation efforts or international negotiations.

At the time of former Prime Minister Taro Aso’s administration in 2009, international criticism was raised about the very weak mid-term target, which was set to an 8% reduction from 1990 (15% reduction from 2005) by 2020. Compared to back then, the floating number is even lower. If that is the case, Japan would almost certainly expose itself to further international criticism. 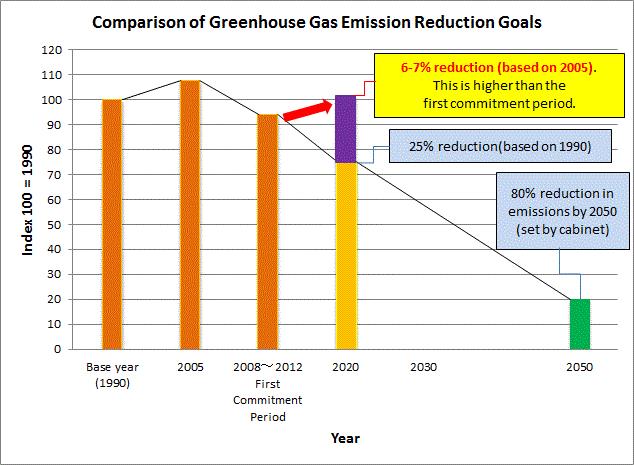 It is essential that Japan sets a reduction target for 2020 before COP 19. However, the following points should be met.

In order to avoid catastrophic climate change, it is vital that global mean temperatures should be kept at a 2°Cincrease from pre-industrial levels. The 2°C goal means that by 2015 global emissions will peak and will drop thereafter. To achieve these reduction targets, it is necessary that developed countries set a target within the range of25-40% based on 1990 levels by 2020.

However, because current reduction pledges by countries are not enough to meet the 2°C goal, raising the pre 2020 ambition has been discussed at international negotiations and it will be an important agenda at COP 19. If Japan’s “25% reduction targets based on 1990” were to fall, it would only hinder world efforts to raising ambition. Japan should have ambitious goals based on science.

2. Nuclear is not a solution for preventing climate change

After the Fukushima Daiichi nuclear power plant disaster, nuclear power plants in Japan have halted operations entirely for now. As a result, many people in Fukushima had to escape to evacuation shelters and workers must risk their lives trying to repair the damage. In addition, the cause of the Fukushima nuclear accident is still unclear and large amounts of radioactive material is entering our environment and creating a very serious situation. Under such circumstances, without the absolute acceptance of the argument to re-start the nuclear power plants, it is not realistic that nuclear be the backbone of climate change measures as it were once before.

On the other hand, with no nuclear plants, a rise in CO2 by the increase in the number of thermal power plants should be avoided. With the assumption of no nuclear power by 2020, through the aggressive increase in the introduction of renewable energy and energy conservation, we should be able to maximize our potential to reduce emissions.

Under the instruction of Prime Minister Shinzo Abe, there are currently talks taking place in the joint committee of METI’s (Ministry of Economy, Trade and Industry) Industrial Structure Council and MOE’s (Ministry of Environment) Central Environment Council. However, options on target numbers have not been considered thus far in deliberations. According to the report, discussion to adjust the targets at the cabinet meeting on October 1st was carried out without consultation from the public. This process is completely non-transparent. Mid-term targets are very important with regards to determining future environment and energy policies. Taking the above points into account, decisions should be made in a transparent and democratic way through creating opportunities for public participation from NGOs and the public (not only stakeholders in the business sector).