Tokyo — A concerned group of citizens gathered in the front of the U.S. Embassy in Tokyo to take part in an emergency action hosted by Greenpeace Japan and 350.org Japan to protest the U.S. exit from the Paris Agreement. 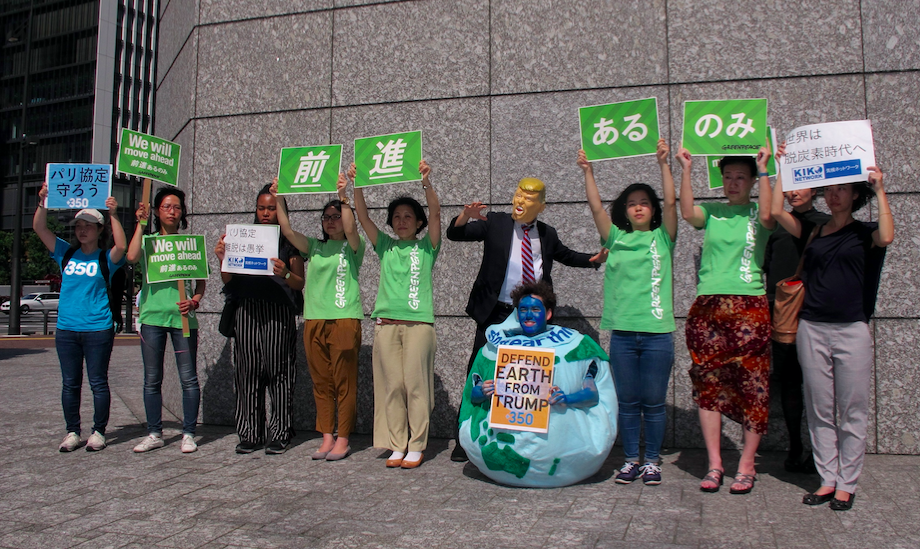 In a series of panels, Greenpeace Japan conveyed the message that “We will move ahead” and emphasized that the world remains committed to upholding its commitments under Paris Agreement, with or without the United States. Simultaneous actions in front of U.S. embassies worldwide will be conducted by each local Greenpeace office to communicate this message. 350.org Japan urged world leaders to defend the Paris Agreement while satirizing President Trump’s decision to pull out of the historic climate accord. The organization held a creative action to convey the importance of climate action.

“Almost 200 countries committed to climate action in Paris and only one has decided to withdraw. Climate change is the biggest and immediate threat to the global environment. There is no choice of delay or backward in measures. I am an American, but I will move ahead into the future with world leaders, CEOs and people across the world” said Kendra Ulrich, Senior Global Energy Campaigner with Greenpeace Japan.

Shin Furuno, 350.org Japan Divestment Campaigner, stated: “The Trump administration’s decision to pull out of the Paris Agreement is an act that prioritizes the profits of the fossil fuel industry over the future of our planet. As you can see from the numerous fossil fuel divestment commitments made by institutions across the globe, including many U.S. financial institutions and institutional investors, the world is undeniably headed toward a fossil free future. The recent growth in the renewable energy sector is testament to this transition. In addition to strong commitments by countries such as Germany, China, and India, businesses and local governments worldwide have indicated their strong will to take the initiative to combat climate change in support of the Paris Agreement, with or without the United States. President Trump will not be able to stop the global tide of decarbonization.”

Kimiko Hirata, International Director of Kiko Network stated the following: “The Paris Agreement will be the fundamental foundation for international action on mitigating the dangerous impacts of climate change, establishing a sustainable society, and securing a future for peoples across the world and future generations. This decision treads on the accumulation of concerted international efforts and is unacceptable. The U.S. has made a grave mistake by choosing to support the fossil fuel industry over the ever-growing renewable market. This decision will leave the U.S economy disadvantaged and damage the country’s standing with its diplomatic partners. On the other hand, the decision will encourage the rest of the world to be more resolute and to act more urgently than ever. The Japanese government should be prepared step up its policies to reduce greenhouse gas emissions, expand on its support to developing nations, and be willing to cooperate more with other nations, including the U.S.”

All three groups strongly condemn the U.S. government’s announcement on exit from the Paris Agreement. We request that the Japanese government act upon its commitments under the Paris agreement in order to advance the global effort to combat climate change. Japan has expressed its determination to implement its promises made under the Paris Agreement. However, the government is proceeding with plans to build 44 new domestic coal-fired power plants and providing massive funding to coal development projects overseas. There is a clear disparity between the Japanese government’s words and its actions. The Japanese government should immediately reconsider its energy policy based on unsustainable energy sources such as coal and nuclear, and commit to shifting to an energy policy based on 100% renewable energy sources.