Protest against the Minister of the Environment’s approval of the building of new coal-fired power plants (February, 8th, 2016）

Plans for the construction of new coal-fired power plants have continued to emerge since 2012, following the Great East Japan Earthquake and the Fukushima Daiichi Nuclear Power Plant accident. Currently they have reached 47 plants with a capacity of 22.508MW. As can be seen from the results of the E3G report below, Japan is the only one of the G7 nations to exhibit such a sharp increase in new construction plans during the past five years. 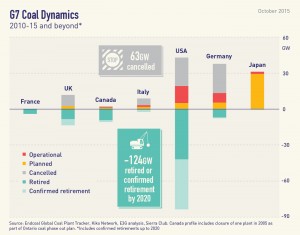 Source:E3G”Japan isolated as USA leads the way in G7 move beyond coal”

On five occasions last year, the Minister of the Environment objected to construction plans for coal-fired power plants in environmental impact assessments, commenting that “this is hard to approve” or similar. However, we now hear that any day now a firm policy to approve these plants will be produced, and that Marukawa Tamayo (Minister of the Environment) and Hayashi Motoo (Minister of Economy, Trade and Industry) will meet to agree the matter.

The tide of opinion worldwide is increasingly in favour of moving away from coal, spurred on by December’s Paris Agreement. Internationally, we see America showing regulatory policies and the UK deciding to eliminate its existing coal-fired power plants by 2025: the move away from coal-fired power generation is positioned as a policy that should be top priority among measures to combat climate change. Yet Japan’s Minister of the Environment, who is responsible for Japan’s environmental policies and should be working to prevent climate change, is switching sides to approve the construction of coal-fired power plants. This runs counter to the coordinated action on decarbonization in the Paris Agreement signed, with Japan’s participation, last year. It is a reckless act that will incur serious criticism from international society.

Even if newer coal-fired power plants are more efficient, in the long term they will continue to emit CO2, and today’s announcements of the establishment of an “Electric Power Council for a Low Carbon Society” (ELCS), a Commitment to a Low Carbon Society and related objectives, lack any explanation of how it will be possible to reduce the emissions from coal-fired power generation. To approve the construction of new coal-fired power plants under such circumstances even jeopardizes the long-term target for an “80% reduction in greenhouse gases by 2050”, decided by the Japanese government in cabinet, and will transfer a huge burden to future generations, as well as leaving providers with the risk of stranded assets. We strongly insist that the Minister of the Environment should not make decisions that are, as in this case, mistaken on both environmental and economic grounds; should demand that construction plans be halted or held back; and should implement domestic environmental policies which promote a change to energies which encourage energy saving and reuse.