In April 2022, a number of individual shareholders, including representatives of Japanese and overseas environmental NGOs, submitted shareholder proposals calling for stronger climate actions from four companies in the financial, trade, and power sectors (Sumitomo Mitsui Financial Group, Mitsubishi Corporation, TEPCO Holdings and Chubu Electric Power, the latter two being shareholders of JERA). These proposals did not succeed at shareholders’ meetings in late June, but did gain a certain degree of shareholder support, as shown in Table 2. The proposals were mainly in line with the recommendations of the Task Force on Climate-related Financial Disclosures (TCFD), urging companies to create and disclose concrete plans to achieve net zero emissions.

The results of our review show that (1) while there are still some concerns about having corporations amend their articles of incorporation, there is growing support among Japanese and overseas investors for shareholder proposals that seek stronger climate action, (2) there was greater support for proposals that would require the creation and disclosure of business strategies consistent with the Paris Agreement, and a certain level of support for proposals that could have an impact on core corporate business models, and (3) more investors are making their own decisions through engagement with companies, independently of major proxy advisory firms.

The results of our survey on the exercise of voting rights for each proposal are reported below.

Table 1 shows the “for” and “against” votes (number of companies and organizations) for each proposal, as far as we were able to ascertain up to October 31, 2022, based on a review of publicly-available information on the exercise of voting rights by institutional investors regarding six proposals targeting four companies. (See Table 2 for details of proposals.)

* In a “split” vote, a company’s or group companies’ exercise of voting rights are divided in terms of for versus against. “Total” refers to the number of companies and organizations whose results we were able to confirm in our survey, among investors who exercised their voting rights for each proposal.

Under Japan’s Companies Act, the only way for shareholders to get a resolution placed on the agenda is to request changes to a company’s articles of association. That is the reason we took this approach. The issue was that some institutional investors deemed our resolutions inappropriate to be written into the articles of incorporation in consideration of those restrictions.

On the other hand, these voting results are evidence of growing awareness about the materiality of climate change.

Analysis of support for proposals

The levels of support suggest that investors tend to support proposals calling for the creation and disclosure of business strategies consistent with the Paris Agreement (SMBC Group proposal 4 and Mitsubishi Corporation proposal 5). Nevertheless, it is worth noting that shareholder proposals calling for a transition to net zero, which can also affect the fundamentals of a company’s business strategy (business model), are supported by around 10-20%. The proposals are not legally binding because they did not receive more than the required two-thirds in support, but these results still suggest that a number of institutional investors that even companies cannot ignore are calling for stronger measures to combat climate change.

Table 2. Support ratios for proposals in 2022 and previous years 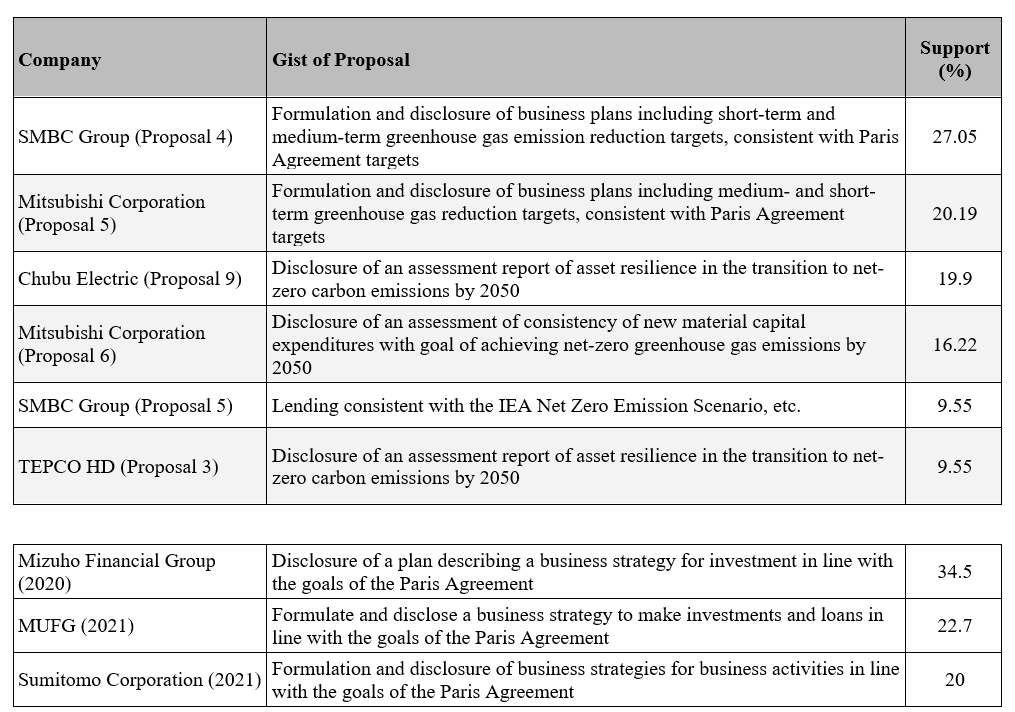 This year, the stances of Glass Lewis and Institutional Shareholder Services (ISS), which are said to have a certain degree of influence on investors’ voting decisions, also diverged significantly.

Although the opinions of advisory firms were divided on SMBC Group Proposal 4 and Mitsubishi Corporation Proposals 5 and 6, we were probably able to obtain a certain degree of support from shareholders because a growing number of institutional investors are making their own decisions on climate-related policies in order to achieve the clear goal of net zero by 2050, and because of the increasing opportunities for institutional investors to engage with companies on sustainability prior to voting. 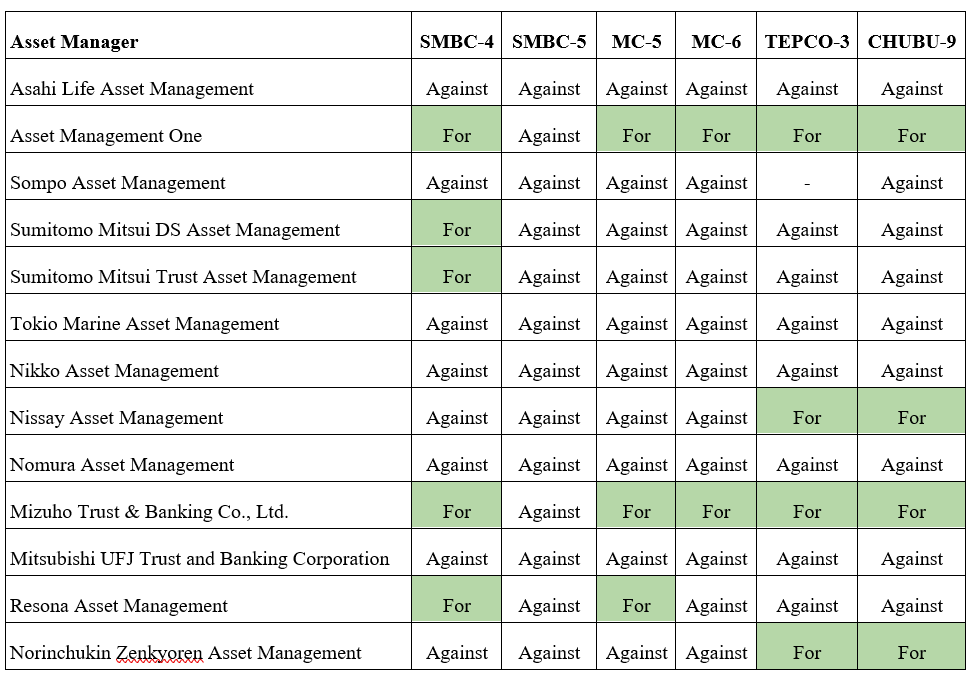 Although there is still some debate about what is appropriate as content for amendments to a company’s articles of incorporation, there is growing understanding of the materiality of climate change and recognition that medium- to long-term plans have an impact on corporate value. This trend is more evident when we look at the voting results of major overseas institutional investors’ proposals. 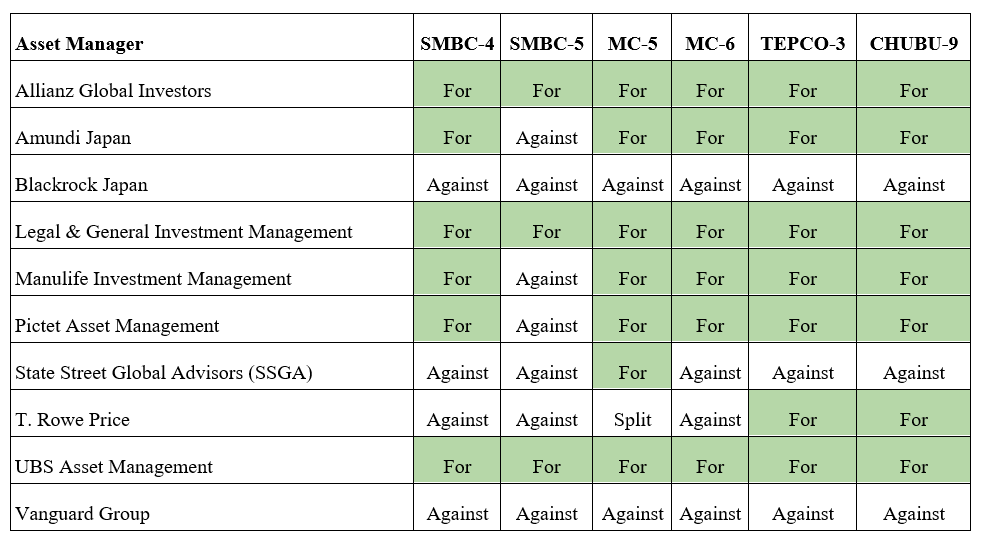 Overseas investors have more “for” votes than Japanese investors. On the other hand, it is concerning that some major foreign asset managers were “against” all proposals outright in a situation where the momentum for decarbonization could weaken in the context of the energy crisis.

Many institutional investors in Japan and overseas have signed the Net Zero Asset Managers Initiative (NZAMI), an international framework of asset management companies aiming to achieve net zero by 2050. Since the success of NZAMI’s commitments depends very much on the actions of companies they invest in, institutional investors need to encourage them to strengthen and accelerate their efforts toward decarbonization.

While companies are making certain efforts, such as preparing TCFD reports to promote information disclosure, setting long-term targets for 2050, and publishing their own climate action plans, none of the companies targeted by the shareholder proposals have been able to provide concrete plans for achieving their targets for 2050, so their measures continue to fall short. Based on the voting results regarding shareholder proposals, we strongly call upon each company to present a plan that incorporates realistic and concrete actions to achieve decarbonization targets, and to accelerate their actions.

Results of Exercise of Voting Rights on Shareholder Proposals (PDF)